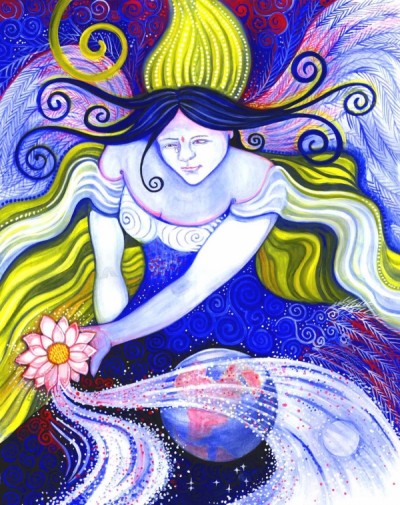 This image can also be purchased in digital form for use on a website or other publishing uses. Contact me for pricing and usage policies.

Her compassion for living beings and her desire to save them from suffering is her reason for strewing mercy to the world. Her love heals at the source of dis-ease, bringing health, strength, longevity and beauty. When we operate from this space of compassionate love we offer the vision for inner and outer peace.In many eastern cultures there was a female figure called Tara, which meant to strew. The goddess Tara is a multifaceted deity within Tibetan Buddhism. Her name can be translated and interpreted in several ways for the term Tara also means star, and is associated with the polar star, the primary tool used by travelers to guide them onto a correct path. Her role varies with the culture and many maintain her as the saviouress, (the female side of Buddha). In India there was a Sun Tara, a Moon Tara, Gold Tara, etc., twenty-seven Taras in all. Three times nine goddesses whose sacred numbers are three and nine, and who are said to be the Creation of All Things. She eventually became the goddess of other cultures and went by the names of Tana, Ana, Diana, Ana, Anna, Anu, Danu.  She is an enlightened being who is the perfection of compassion and wisdom that is ever present within every sentient being. The word Tara itself is derived from the root (to cross), hence the implied meaning: the one who enables living beings to cross the Ocean of Existence and Suffering. She is understood to be working on three levels; working to advance the enlightened state of all sentient beings, a fully enlightened being herself, and as a great mother. There is a tinge of sadness in this Tara, but she brings the knowledge, that as Joseph Campbell, the great investigative mythologist said, “…live joyfully in a sorrowful world.”