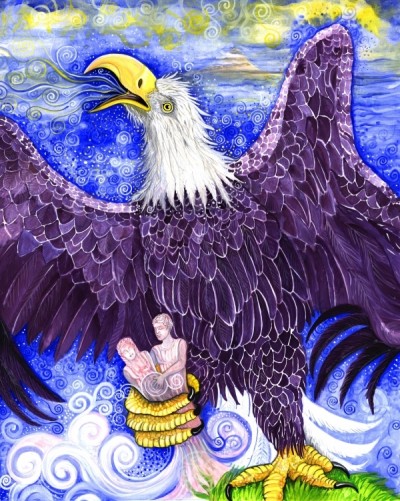 This image can also be purchased in digital form for use on a website or other publishing uses. Contact me for pricing and usage policies.

Beloved Relationship is about being brought to the highest level of healing, growth and love between two souls. A Beloved Relationship is about making the commitment to be led by Spirit, represented by the eagle, where by honoring both masculine and feminine they both reach the heights of unconditional love and acceptance through forgiveness. Inspired by the Roman myth of Ganymede who was given immortality by Zeus, I have created a new myth where two souls with faith and trust illuminate the importance of the balance of yin/yang and that the everflowing, neverending cycle of life is understood only through the strength of Spirit. Recreating this myth brings the feminine energy back to a power position alongside and in balance with the masculine.  While studying the powerful eagle I noticed its deep-set eyes that are enhanced by the thick eyebrows which gives them a permanent scowl. So, I deliberately painted this new mythed eagle with a lighter, more compassionate, less angry appearance. As beloved couples gain in numbers they will ultimately transform the patterns of the wounded and angry past. The new energy of compassion and forgiveness paves the way for others to reach the highest of heights. This is the power of beloved relationship.